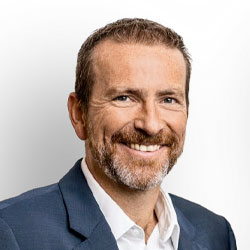 The graduate business mathematician (Germany & USA) did his doctorate on evolutionary optimisation algorithms. During this time, he worked as a lecturer for software development and computer-aided planning, among other things, and conducted research as a visiting scientist at Stanford University. The family father, passionate cross-country skier & beach volleyball player heads the fortunes of Opheo Solutions GmbH. Previously, he was co-founder and board member of initions AG, from which Opheo Solutions GmbH was spun off in 2021.

What is a Transport Management System?

If a user is looking for a suitable transport management system, TMS for short, they will quickly be overwhelmed by a large number of product results when searching the Internet. Of course, there are countless providers on the market. On closer inspection, however, one realises that the buzzword TMS conceals products with sometimes very different functionalities and applications. Sometimes one gets the impression that a system only has to have something to do with transport or forwarding in the broadest sense in order to be called a TMS. This is reason enough to shed light on the question of what is generally meant by a transport management system:

In a broader sense: classifications of TMS

In general, a transport management system deals with the planning, execution and optimisation of the physical movement of goods.[1] It can be seen as a logistical platform that enables the user to plan, monitor and optimise the daily use of the available means of transport. And it does so with complete transparency and control. This list pretty much describes the central tasks of the dispatcher. This makes it clear that the main user of a TMS is the dispatcher.

In principle, the means of transport can be ships, railways, aircraft or trucks. However, most transport management systems currently offered on the market focus on the control of truck fleets.

Usually, the TMS term is only used in connection with external transports. According to DIN 30781, internal transport is referred to as “conveying”.[2] and in terms of software technology, they are usually not mapped via a TMS, but via an intralogistics system.

The software solutions offered on the market under the term Transport Management Systems often include the following functionalities:

Whether all of these functions or only some of them are actually needed depends heavily on the individual requirements of the applying company. In particular, the perspectives of transporters and shippers must be clearly distinguished from each other.

Different perspectives on the TMS: transport service provider versus shipper

The partly considerable functional differences between TMS solutions can also be explained by the different perspectives and requirements of transport companies and shippers. For the transporter, the execution of transports represents the core of his company’s value creation. For them, almost all processes revolve around this core, not just the transport processes. With regard to software support, the transporter therefore has the requirement of being able to map all company processes in a single monolithic system if possible. To satisfy this requirement, so-called “freight forwarding software systems” have been developed since the end of the 1980s. At first, however, they focused on the sales and commercial requirements of the transport companies. Later, simple functions for dispatching and route planning as well as for execution monitoring were often added to the systems. With the emergence of the term TMS, these forwarding software systems were then also sold under the label Transport Management System.

The view that “today’s transport management systems represent a further development of conventional freight forwarding software”[3] is justifiable against the background of this historical development. However, this does not take into account that the requirements of shippers for a transport management system differ significantly from those of transporters and freight forwarders.

For the shipper’s transport management, administrative, commercial and sales tasks such as customer management, quotation preparation or invoicing usually play no role, as these functions are usually mapped in ERP systems and relate not only to the transport service but primarily to the goods delivered. The focus of the transport management systems required by the shipping industry is rather on the functions that were already mentioned as core elements in the definition of the term quoted above: Planning, optimisation and monitoring of transports. The TMS core elements for the shipper are supplemented by functions for the selection and data connection of the transporter.

The following figure compares the TMS requirements of transporters and shippers and illustrates that the intersection lies precisely in the core functions of planning (route planning), optimisation, monitoring and control of transports. 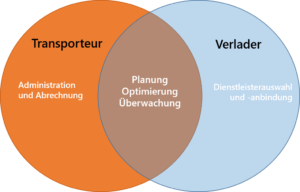 What types of transport management systems are there?

If, on the other hand, one deliberately defines the term TMS somewhat more broadly, further interesting approaches emerge. The various software solutions offered under the heading of TMS for road freight transport differ, as mentioned at the beginning, in part quite considerably in the functionalities supported. With the help of the following classification into five classes, users can make a preliminary selection of the transport management systems relevant to them. The central questions from the user’s point of view are:

Users and departments involved in the transport process

To classify the different transport management systems, it is first helpful to look at the different employees involved in the transport process. The following directly or indirectly involved groups of people and departments in the company can be identified:

The administrative tasks in industry and trade are usually supported by ERP systems. They cover processes such as quotation preparation, order management and invoicing, sometimes even up to accounting. Modules for inventory management and warehouse management are also frequently included. Although ERP systems are not usually explicitly designated as transport management systems, they often also contain simple basic functions for route planning and are therefore included in this classification for the sake of completeness.

ERP solutions tailored to the requirements of freight forwarders are called freight forwarding software systems. They have existed since the 1990s and can be considered the first transport management systems in the narrower sense. As a central administration system, they should not be missing in any forwarding company. The solutions often also support fleet management, offer interfaces for customs clearance and dangerous goods registration and contain basic functions for route planning and monitoring. However, functions for automating route planning and for the subsequent tasks of transport management, such as forecasting and driver support, are usually missing.

Route planning software supports companies in planning and optimising routes. The transport orders to be planned are usually taken over from upstream systems such as ERP systems or freight forwarding software. Tour planning systems often use mathematical optimisation algorithms that can automatically create tour plans according to predefined criteria. Monitoring and control of transport execution is often not carried out at all or only rudimentarily in pure route planning systems. In some cases, the solutions do not have their own user interface, but only consist of an optimiser that returns the generated route plans to the upstream ERP or freight forwarding software system.

The core functions of the transport control centre are (automated) route planning and scheduling, the monitoring and control of current transports as well as the calculation of the expected development in the next few hours, which is referred to as forecasting. In this context, ETA forecasting, i.e. the calculation of the estimated time of arrival, is becoming increasingly important, as knowledge of the ETA times is particularly valuable for both the customer and the company’s own order picking for the control of further processes.

The continuous inclusion of the driver’s current driving time data plays an important role for both route planning and forecasting. Transport control systems are therefore characterised by close integration not only with upstream ERP or freight forwarding software systems, but also with downstream telematics systems.

Telematics links telecommunications and information technology. In the context of transport management, this means the transmission of data between the dispatcher on the one hand and the vehicle or driver on the other. Telematics systems usually consist of a mobile application that is operated by the driver and a web-based user interface for the dispatcher to monitor and control the tours. Providers of telematics systems increasingly refer to their solutions as transport management systems and are therefore part of this classification.

Transport platforms are not transport management systems in the narrower sense and therefore represent a special class. They support the awarding of transport by a commissioning company (consignor or freight forwarder) to a service provider who assumes responsibility for the execution of the transport. The further management of the contracted transport is thus the responsibility of the service provider. In the meantime, transport platforms are sometimes also supplemented by functions for tracking consignments, so that the client does not have complete control, but at least transparency over the delivery process.

In addition, attention should be paid to the “digital freight forwarders”, most of whom are still operating as start-ups, who have been pushing onto the market with their transport platforms for some years now. However, in contrast to previous market practice, they no longer provide proprietary software, but act as providers of forwarding services themselves. On their online platforms, they match transport requests on the one hand with free transport capacities of the participating transport companies on the other. 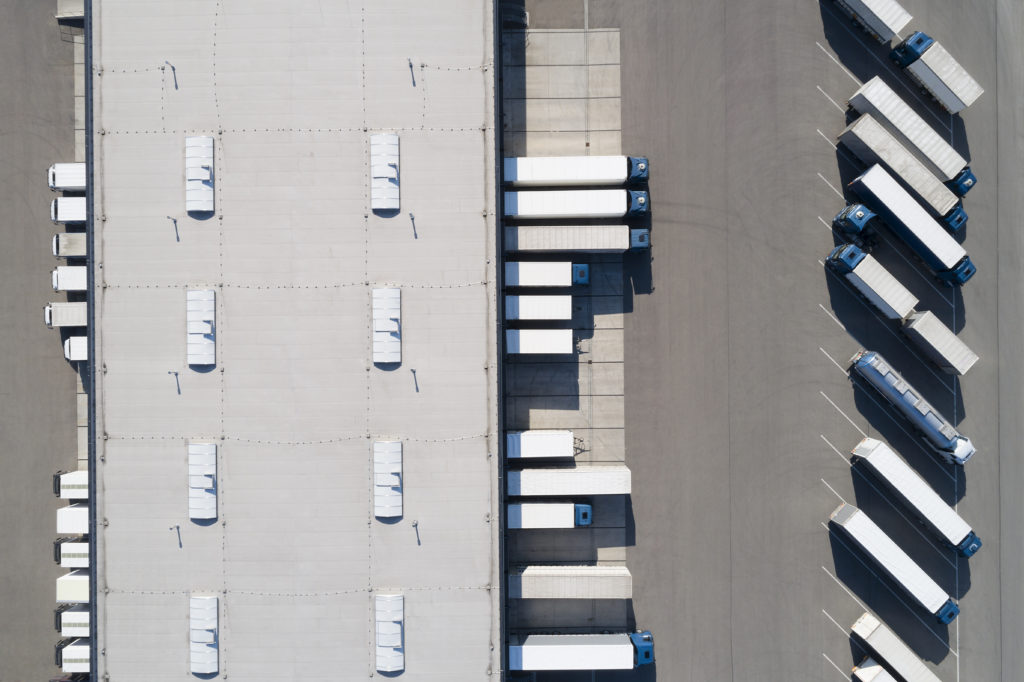 In the course of the digitalisation of transport management, more and more transport management systems, which belong to the class of transport control centres, also offer the possibility of including the customer or consignee in the electronic data flow. This is done, for example, via functions for shipment tracking or for the automatic dispatch of notifications, i.e. electronic messages on the estimated time of arrival (ETA) of the goods.

These additional functions for digital networking are relevant for both shippers and transporters and should not be missing from any transport management system today.

The core elements of a transport management system are the functions for route planning, optimisation and monitoring of transport. The main user is the dispatcher. Some of the software solutions offered on the market under the term Transport Management System include significantly more functions, especially when it comes to freight forwarding software. These additional functions can be interesting for forwarding companies, but not for shippers as a rule.

Unfortunately, some systems are also offered under the keyword TMS in which the core functions of planning, optimisation and monitoring are not available at all or only to a small extent. For these products, the use of the term Transport Management System must be considered borderline.